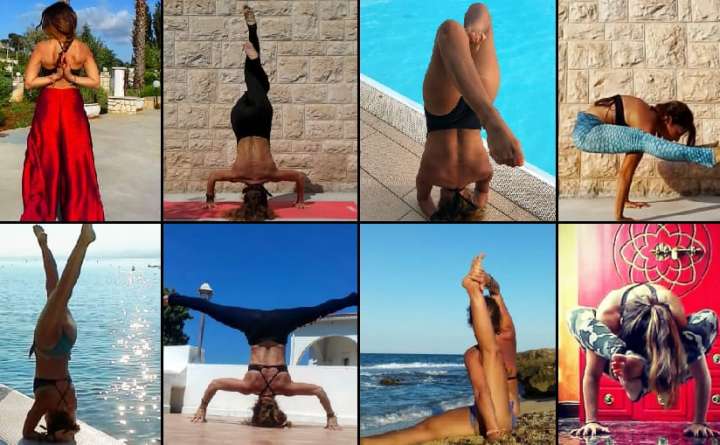 Isabella is a certified yoga teacher RYT 700 by Yoga Alliance International. She studied in Thailand and india, covering the following subjects: Asana, Pranayama, Kriya, Bandha, alignment, adjustments, therapeutic and Restorative yoga physical and energetic anatomy, meditation, philosophy and mantra. She is also certified yoga teacher for children by Yoga Alliance International and certified yoga teacher Csen, Coni in Italy. Since 2011, she has been travelling from Europe to United Stated and Thailand and at some point yoga simply becomes her life. Traveler, eclectic, dreamer, smiley, sensitive, gentle, kind, and passionate, Isabella started her approach to yoga in 2011, in a meditation Zen center on a little Cyclads island in Greece, approaching Hatha yoga, Kundalini yoga and where she approached also the Shamanic healing, Qi Gong, Tai Chi, but her passion for the yoga practice became more intense when she moved to United Stated and Thailand. Her life changed when yoga found her; in fact she believes that you do not find yoga but yoga finds you, and understanding that it is a great tool for transformation and growth.Now she likes to share the beautiful path of yoga with people of all ages. In Los Angeles, Santa Monica, and Hollywood, where yoga found her, she deeply started practicing in different yoga studios, and practicing different styles of yoga, such as Vinyasa, Kundalini, Iyengar, Ashtanga, Core Power yoga in Hollywood, Bikram yoga – Hot yoga and Hot fitness yoga. She also practiced Ashtanga in Thailand with an intense introduction to the practice. Now she is approaching other styles as Acroyoga, Acrobalance and and Antigravity yoga / Fly yoga.

Isabella, find herself suitable teaching her Core Dynamic – Power Vinyasa flow with the base of Ashtanga practice, and teaches Ying Yoga. She started teaching in Thailand and in 2015 and she teaches regularly her “Core Power Vinyasa flow” and “Yin Yoga” in different yoga studios in Milan, Italy. She organizes yoga retreat in Southern Italy and Thailand.

Among her passions, she is also certified spinning / indoor cycling instructor, she is been practicing for 15 years and certified padi open water 60 feet. She is a certified masseur and Shiatzu therapist level one, she practiced other disciplines as Aikido, Thai Chi, Qi Gong, and she likes running and hiking. She is based now between Italy and Thailand.

YOGA IN PUGLIA Per Pasqua